My last post was written from Portland, Oregon where I was attending and speaking at the Embedded Linux Conference. It was definitely a busy week that I spent there trying to absorb as much as possible from all the sessions and the “hallway track”, while also connecting with people over beers (Portland = beer town).

My intention was to write-up a summary of the event from my perspective and here it is.

This years ELC event was hosted in the downtown Hilton Hotel in Portland. The date of event was March 12 – 14 and that was Monday – Wednesday.

One thing that surprised me when we entered the Hilton Hotel on Monday morning was the lack of information/signs in the lobby. I thought first that we arrived at the wrong Hilton Hotel (do not know actually know if there are multiple Hilton hotels Portland). I was mostly comparing this experience with past ELCE events where you are usually greeted at the door and it is very hard to miss that there is a ELC event going on here. But here there was nothing. We walked past the huge lobby and reached a couple of stairs, and it was first here we saw a sign saying that ELC event registration is upstairs. Which brings up the second problem and last problem/complaint I had with the venue. This particular venue and event was distributed across several floors and the floors where quite small, mostly meaning that there where no large open areas. This layout made the event feel a lot smaller then it actually was because you had people distributed across several floors and this is how it was most of the day. During the evening events you would get most the people in one place but then it was very crowded and loud.

There was one thing that was new at the registration, at least I have not seen this on earlier events. And that was that you where able to choose the design of your conference t-shirt. Though they called it “create a custom design” you where only able to choose from two different templates with no additional customization, which means that you where able to choose between two different t-shirts. Note that there there two design for ELC and two for IoT Summit. But they did actually print the t-shirt design that you choose on site. To me this was mostly a inconvenience and it did not add much value to the experience. You choose which design you wanted at registration, waited a day to get a notification that it was ready to be picked up, waited in line to pick it up and that was it. I would rather have just picked it up when I registered which was on Sunday during the pre-registration to avoid the initial lines.

Every ELC(E) event that I have been to, there has been something that stands out. I have mostly been to ELCE, but one year it was all Yocto, the next one was all Yocto again, 2016 was big focus on software updates and so on.

This year, for me it was RISC-V, the new kid on the block. I have not really heard about SiFive until they announced their HiFive Unleashed board, The First Linux-ready RISC-V Chip. They first announced it in February 2018 at FOSDEM. I had heard of RISC-V but never really given it much thought or looked closer what it actually is.

RISC-V is an open-source full-featured ISA with origins in UC Berkeley and is now days standardized and managed by the non-profit organization RISC-V Foundation. The members list is impressive with companies like Google, NVIDIA, Qualcomm, Samsung and many more. Having an open and free ISA means that there are no license fees nor restrictions on the entities that implement it, which of course is interesting to the major silicon vendors in the mobile and embedded market which is exclusively ARM which is associated with license fees. A free ISA opens some new exciting doors and it will be interesting to follow what lays ahead.

SiFive hosted a Hackathon along side ELC which I attended. You can read more about the actual Hackathon here.

My intention with attending was not be part of the competitions, because I knew that I could not spend the time necessary. I did have one goal though, booting something built with Yocto/OE-core on the board, using meta-riscv which at the time only had support for a qemuriscv64 machine. I did not accomplish this completely during the event but I did manage to do some work which I cleaned up when I got home and which I published, and it got accepted in the upstream meta-riscv layer. There is actually still some tests pending to be run on my work as very few people have the actual board but hopefully it is only minor tweaks to get it working fully. 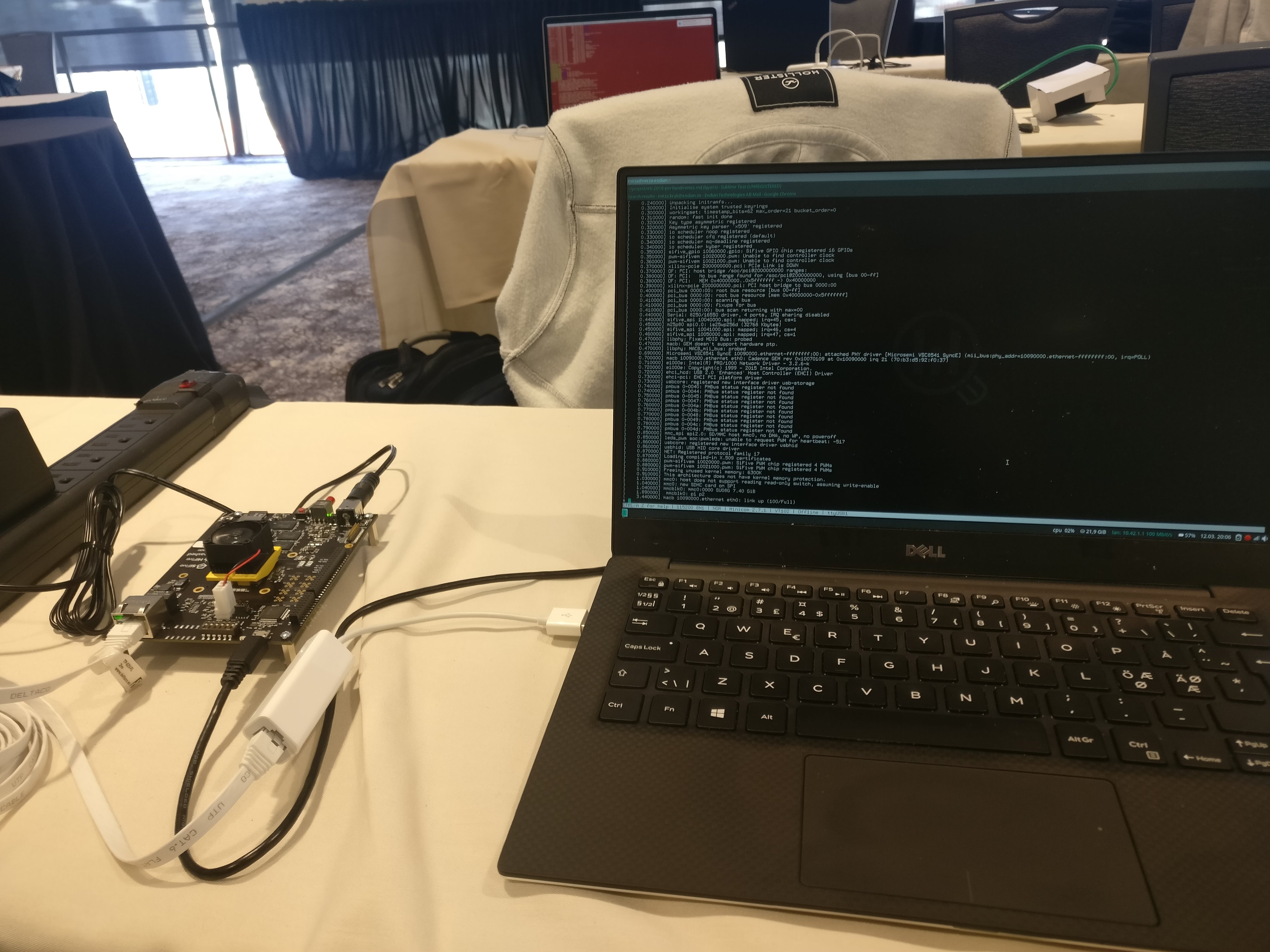 On day one I arrived early (do not want to miss anything) and ate of the complementary breakfast. And then it was off to the Grand Ballroom, venue for the keynotes. I obviously arrived a bit earlier to get a good seat, which I was happy about because the room filled up fast. 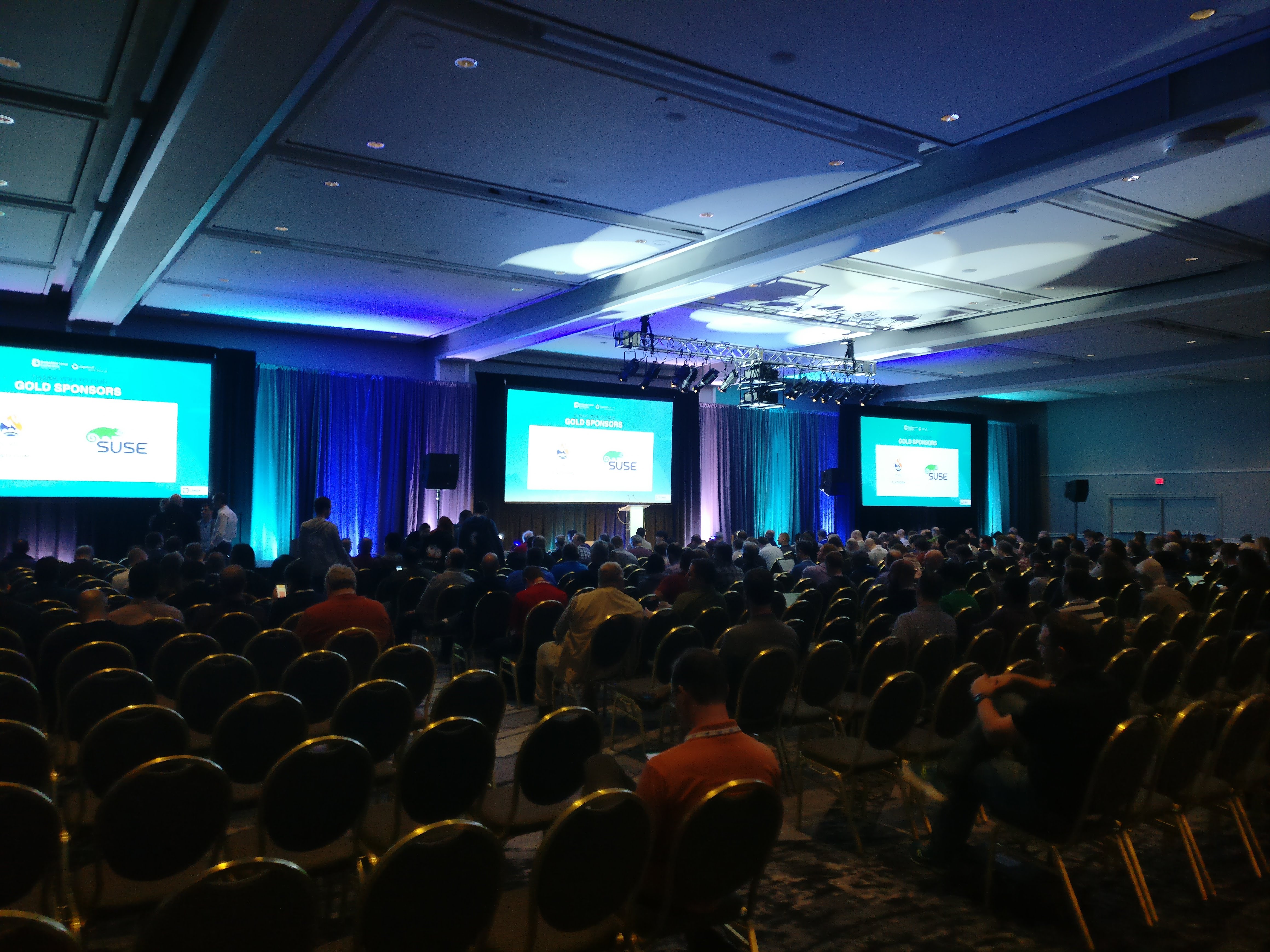 It was hard to capture the full room from that angle but it should give you an idea of how it was. Note that most of the pictures where taken with my phone which does not have the best camera.

I sat through all the keynotes which where:

It is always pleasant to listen to Tim Bird and you can feel the passion that he has for this community and the events that we all like to attend to much.

In this talk Antony talked about how he feels that “IoT will disappear” and how it is not interesting to bring up numbers of connected devices but instead talk about the value that these devices bring by utilizing cloud technologies combined with machine learning and AI.

The three challenges with IoT that Antony focused on was:

And presented solutions on Google solve these within the Google Cloud IoT solution.

Overall a very good presentation and I can recommend you watching the full video which I linked.

Yunsup Lee from SiFive explained on how they are planing on changing the hardware market (silicon) taking inspiration from software, that is basing it on open-source and RISC-V. In the hopes to reduce cost and lead-times making custom chips available to the masses.

One interesting analogy from the talk is that the effort to order a custom SoC should be as easy as ordering pizza.

After the keynotes it was time to head up to the 23rd floor to the SiFive Hackethon for an introduction. I did not stay for the full introduction as I wanted to attend the Mender BoF which was at the same time.

This obviously interested me as I am involved on the community side of the Mender project, which I have been part for the last two years and it is always nice to talk with people that have used the project and discuss the future road-map.

Eystein Stenberg gave an introduction with an demo of the Mender server which is used for device and deployment management.

The current focus for the Mender development team is:

Then there was a free discussion. Here are some keywords from my notes:

After the Mender BoF it was back to the 23rd floor for the SiFive Hackethon, and I stayed here for a while working until late afternoon when I joined the following session.

Obviously I went to this as I was attending the Hackethon and working on getting Yocto/OE-core to boot on the HiFive Unleashed board.

In this talk Khem Raj provides an good overview of the current state of the RISC-V port (linux, gcc, qemu and more) in general and what the status is of meta-riscv and RISC-V in OE-core.

To summarize (what works):

I approached Khem after his talk and told him that I was working on the HiFive Unleashed board support for meta-riscv. He later joined us at the 23rd floor and helped me out with some issues I was having. Big thanks for that!

The day of my presentation on how to integrate an open-source software update solution to a custom board. My time-slot was 10:50am and I decided that I would skip the keynotes this morning and found an empty room to test out all the technical stuff, that is connecting my laptop to a projector and to actually see that it works smoothly. I had tested back home but was a bit paranoid and wanted to make sure that it all still worked, and it did!

Rest of the time I spent walking around being nervous. This was the first time for me speaking to a larger audience (20+) and in my field ELC is the biggest conference, so the pressure was on. I actually went to the last keynote which was in the same room where my session was planned (Grand Ballroom II) to be nearby and to be able to setup my presentation straight after the keynotes finished.

Overall I am happy with how the session went and there was good number of people attending. I am happy that there where many questions at the end of my session as it always more fun to interact with the audience. Though I did the rookie mistake and did not repeat the questions on the microphone and it can be hard to hear the questions on the recording. It is an learning journey and hopefully if I am given the opportunity to speak again I will remember this lesson.

When my session was over it felt a bit lighter to walk around at the event and I mostly enjoyed the hallway track for the rest of day and hacking on the 23rd floor.

There was a sponsor/technical showcase at the end of the day, as there normally is at these events, but it was pretty much the same what was shown during the normal sponsor showcase which was available during the day + beer :).

Last day of the conference was packed with content as well. I decided to attend the keynotes in the morning. The one that stuck with me was:

In this talk Amber Case talks about how we are all cyborgs and how to apply Calm Technology in our design of technology. Best experienced if watched!

After the keynotes I again went to the 23rd floor where it was time to finish up the SiFive Hackaton. There was a demo session where attendees presented what they have accomplished during the event.

Here are the winners:

Congratulations to the hackathon winners! Come meet the teams at our br night tonight at 7pm at Henry's! pic.twitter.com/4qA1Eav3Yi

The winner of the coolest demo was the was a team running OpenEmbedded on the HiFive Unleashed board and running python.

I also presented the patches that I was preparing for meta-riscv which are now upstream:

And here's some OpenEmbedded patches. I'm waiting for a pull request! pic.twitter.com/rO9N1xurAz

After the Hackethon finished up I was mostly attending the “hallway track” until this session:

Some really great insights and one interesting part is that Intel is planing to open-source their whole infrastructure so that more can use it and improve it. Can not wait to see this and hopefully set it up my self.

This was the last session that I attended at the ELC 2018 event and pretty much called the conference here and had to “move” to another location as I was staying with a group of people that where leaving on Wednesday but I stayed until Thursday.

I did join the SiFive team and Hackathon attendees at Henry`s in the evening and we had a blast and was a really nice way of finishing of my trip.

This site uses Akismet to reduce spam. Learn how your comment data is processed.